Below are quotes I found around the web that deal with sick people in toxic relationships. People need to learn to make better decisions in order to eliminate unnecessary pain due to lack of knowledge, that ends in emotional turmoil.  These quotes I hope will enlighten those people who have had the privilege to meet a broken person.  Hopefully these quotes will help someone feel better about themselves after experiencing a toxic relationship.

Remember it's not about you, it's about them.

She has personal issues where her problems become yours, she needs constant support and encouragement, and she is otherwise a miserable person. And this is attractive to you because?

We all like to be needed, and there is a real thrill in moving with someone on an emotional rollercoaster, but there is no stopping the rollercoaster for people like this. They get as much thrill out of instability as they do in being rescued. Persons like this will be constantly off-center. You will not play large in their lives - your ability to rescue will be the centerpiece, and they will engage in multiple catastrophes to let you rescue them.

As has been stated, you are playing a counselor/rescuer role with them and this individual doesn't appreciate you for all you otherwise bring to the table. Do you want to be wanted for who you are or for what you bring? What happens on the day you don't 'bring' it? Will you still be loved or reviled? This is someone who needs 100% all the time. A real relationship allows you to be in calm waters at times and find refreshment with your partner always. She will mine you and rake you for what you can give her for her needs, but what are your legitimate interpersonal needs, aside from rescuing her?

Since you are asking, walk away from her, there's nothing more you can do without changing your boundaries to being a savior to all her tragedy. There is no benefit to be a lover to someone who is seeking a rescuer. There are more mutually satisfying relationships to be in than this one. It will not end well. Something like this can be very entangling and over time emotionally draining. The affective petitions really wrench at your heart, but don't go there. You will never be 'just the boyfriend' any more for all the other benefits you bring to the table. Your Superman efforts get you labeled as such forever and you will never lose the cape.

IS IT CHEATING IF HE SLEPT WITH SOMEONE ELSE WHEN WE WERE SORT OF BROKEN UP?

Some people will play the nut role and say "well I didn't know you felt this way about (whatever)". Ok. So he didn't understand/get clarification on your definition. Well TODAY IS A NEW DAY! If you're going to be with him, clearly spell out your definition of cheating and other shady behavior now and make sure he understands you without any wavering that this is how you feel and what you WILL do if it ever happens again-and be prepared to do what you say you will do if it does happen. That way he can never play the nut role on you again. It will be because he has contempt for you and that is why he did it.

Before the day is done, make sure he understands that cheating means him turning to any other woman for anything intimate, be that emotional, physical or mental because you are the only woman who should have access to his intimacy--no one else. That means missy he's been smashing has to go and stay gone forever.

Sorry if this sounds rude, but that was very beta of you. Luckily for you it's very obvious now how invested she still is in her ex. You need to end it with her and cut contact immediately. It's only a matter of time before she disrespects you in other ways if you continue this relationship. Can't believe she got sooky just because you wanted her to cut contact with her ex, if that's not an indicator of how invested she still is then I don't know what will. It's your choice, but I honestly don't see this relationship lasting long, or at least happily lasting. Good luck.

In other words, a man doesn't stray because he thinks he'll get better sex with a better-looking body. "In most cases, he's cheating to fill an emotional void," Neuman says. "He feels a connection with the other woman, and sex comes along for the ride." If you're worried about infidelity, focus on making your relationship more loving and connected, not on getting your body just right or mastering new sexual positions. (But know that sex does matter — it's one of the key ways your guy expresses his love and feels close to you, so be sure to keep it a priority.)

Only 12% of cheating men said their mistress was more physically attractive than their wife.

I think the wife is partially to blame for the quality of the marriage, but she is not to blame for the cheating UNLESS her husband has made every effort to talk to her about the problems he's having, told her that he feels he's being driven to find comfort with other women, and tried to get her to go to counseling, and she's refused to make any effort to remedy the situation.

A wife can't know there's a problem if she's not told, and she can't know how serious it is unless she's told. Just as men get caught up in their day-to-day lives, working long hours, watching sports, going out for drinks with the guys, etc, and neglect their wives or take their wives for granted, women can get caught up in their children, friends, jobs, etc., and neglect their husbands. If a spouse chooses to cheat, that is their choice and no one else's. Understandable, if it's the only choice left to them, but then you should probably be looking at divorce, not cheating. If cheating is the first thing they do when there are problems in the marriage, then no, I don't think their spouse should take the responsibility for that, that's on the cheater.

He goes from tale to tale and details don't seem to stay the same. He first told you he was out with the boys. Then, he said he was at happy hour with coworkers. If the inconsistency persists, he could be fibbing. The next step? We hate to suggest this, ladies — you may not have a choice — but do a little snooping. If he says he was with the boys, try to get the scoop from the boys.

Experts say if someone can't look you straight in the eye, he or she is probably not telling you the whole story. No wonder your momma used this trick when you were little and she thought you were telling a tall tale.Study his body language when he's justifying something or telling you something that you think he may be lying about. If he's not able to look you in the eye, the next step would be to just come out and ask him. By this time, you should be able to tell if he's truthful or not by using the eye tactic. (Watch a fun play on reading a fibber's body language on the TV drama, Lie To Me -- a pic from which is below.) 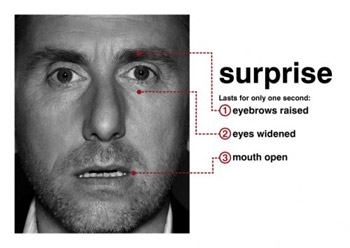 Sometimes the details will be really obscure, or perhaps there are too many details. If your man gets too specific and is giving too much information, he may be compensating for something.People who are lying tend to over tell because they're hiding the very thing that they're revealing. If the man in question is giving you random details about an event or story, pry a little bit — ask some questions about said details. See if he trips on the specifics.

Okay, it doesn't take a brain surgeon to tell you that if he has lied before, he may lie again. Not to throw the man under the bus or anything — of course, it would also depend on what he's lied about in the past — but you can never trust someone who's capable of making up stories too easily.Now for the next step... If he's made lying a habit and the lies are too huge to ignore and forget, you may want to consider leaving the relationship. If he lies here and there, and they're minor fibs, talk to him and get to the bottom of what's with all the lies. It might be the result of an insecurity. And if that's the case, then reassure him that he can be honest with you.

If you just know, we've got bigger problems. Whether he lied or not is no longer the issue if this is the case. You just don't trust the man. And what's a relationship if you don't have trust? Sit with your thoughts and come to grips with why you don't believe him. If the relationship is that important to you, after you do some soul searching and thinking on your own, sit him down for a talk. Work things through — find out what the problem is, and try to remedy the situation before it gets even more difficult.

A woman knows all she has to do is shake what her mama gave her and you won't be able to think about anything but boobies. So, if she's trying to change the subject by being sexy, don't let your brain forget the check her booty can't cash.

If she doesn't feel comfortable accepting gifts from you, either she isn't really feeling you anymore or she did something bad and feels guilty because you're being so nice. This isn't to say only buy her flowers for no reason other than to see if she squirms, but it's a good barometer.

On the other hand, this isn't the "State Of The Union." It's just you, her boyfriend. So, if she's using overly formal language and sounds almost like she rehearsed this speech, beware. Just like a slick politician, she's full of it.

If she gets mad at you simply for asking about something, that is a real problem. If she cares about you, she'll want to put your mind at ease. If she turns the tables on you and gets all accusatory about being badgered with questions, something is up. The lady doth protest too much.

Have you seen her lie to other people about big things for her own benefit? I'm not talking about tiny white lies like "all this hair is really mine" or "I baked this from scratch," but real character-compromising lies. If the answer is yes, then what makes you think she isn't willing to fib to save face with you?  When she lies to others, how and why does she do it? Now compare it to your situation—sound familiar?

Listen To Your Gut: We all run on instinct. If you think something is fishy, speak up. If it's merely paranoia, she should be able to help you relax. But if you still feel something is not right, it most likely isn't. When has your gut lied to you?

This was just a small number of issues we face when dealing with some toxic people.  Selfishness and lack of empathy for the pain of others fuels the fire for these individuals. Be careful people, and learn to trust your gut.

View all posts by: Ernest Johnson